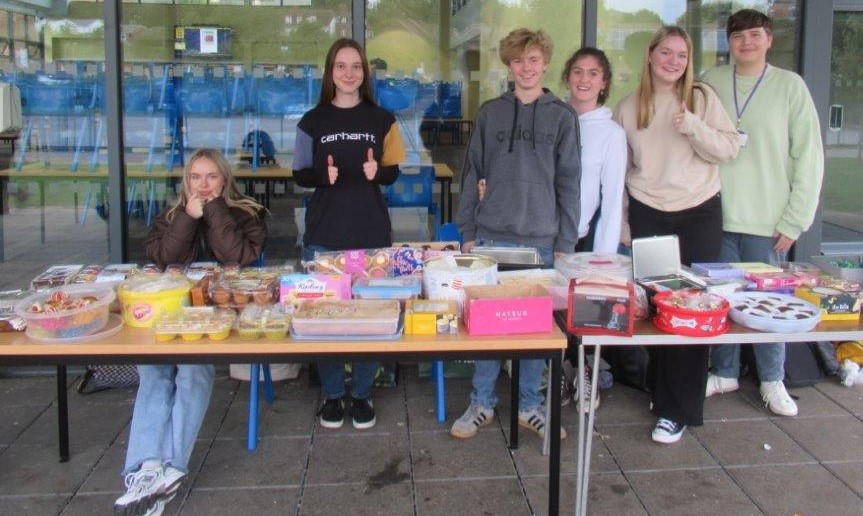 Our students stepped up to the mark again for #MacmillanCoffeeMorning last week, making cakes, selling cakes and eating cakes - delicious! And we raised over £200 in the process. @macmillancancer https://t.co/6uWN6MW1iS

We're looking for a professional, efficient Admin Assistant at The Charles Dickens School in Broadstairs, part of our Trust. It's a busy role with lots of variety and working with great colleagues. For further details please click the following link :https://t.co/ttkHVhUIPX

It's been a busy couple of weeks for extra-curricular PE clubs. Y9 & 10 participated in the first set of netball fixtures of the year whilst Y7 & 8 had Netball Club to prep for their games & over 120 students in Y7-10 attended football club to prep for their forthcoming fixtures. https://t.co/t1of50AZCG 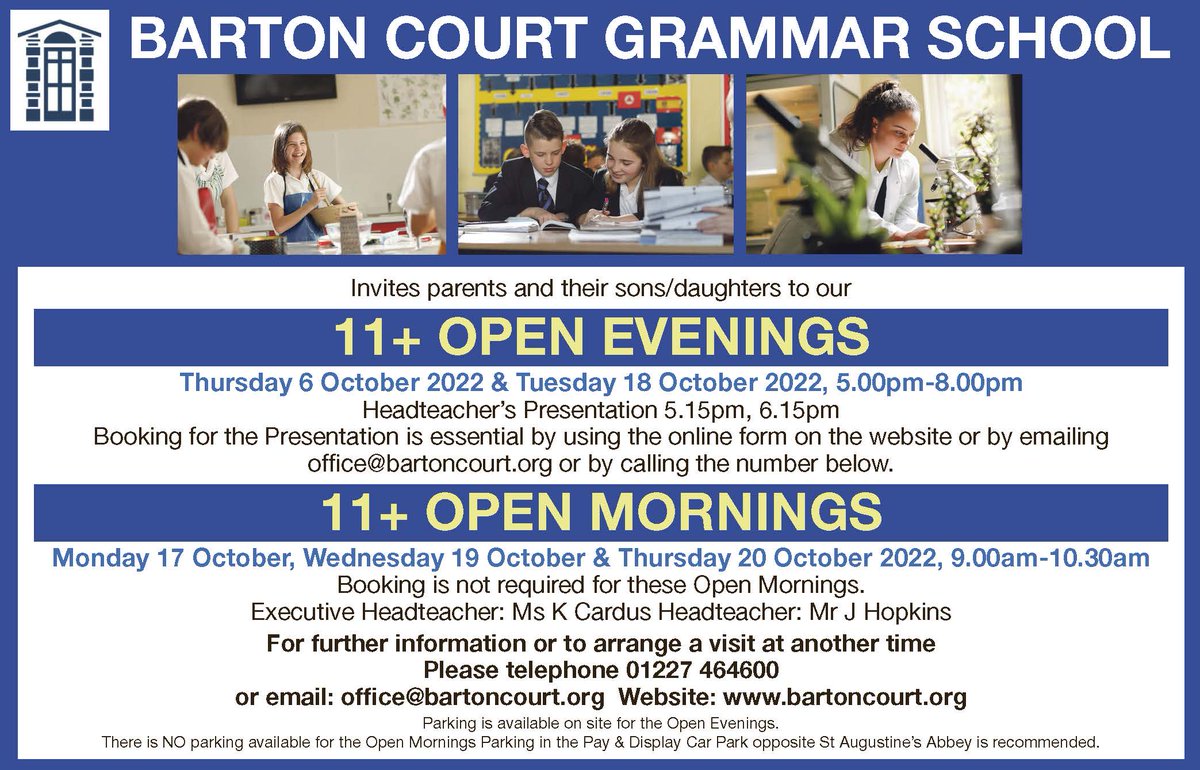 A reminder of our 11+ Open Evenings this year, Thursday 6 October & Tuesday 18 October - 5pm-8pm. Please book for either of the two Headteacher Presentations at 5.15pm or 6.15pm using the online booking form: https://t.co/ljZ1SXm7mr https://t.co/eY4SD5kJfV

BCGS & BMS have started a Mathematics Enrichment Club for Y7, kicking off this week with students from both schools discussing & solving unusual Maths problems. Everyone loved it! https://t.co/x1RnbskuwR 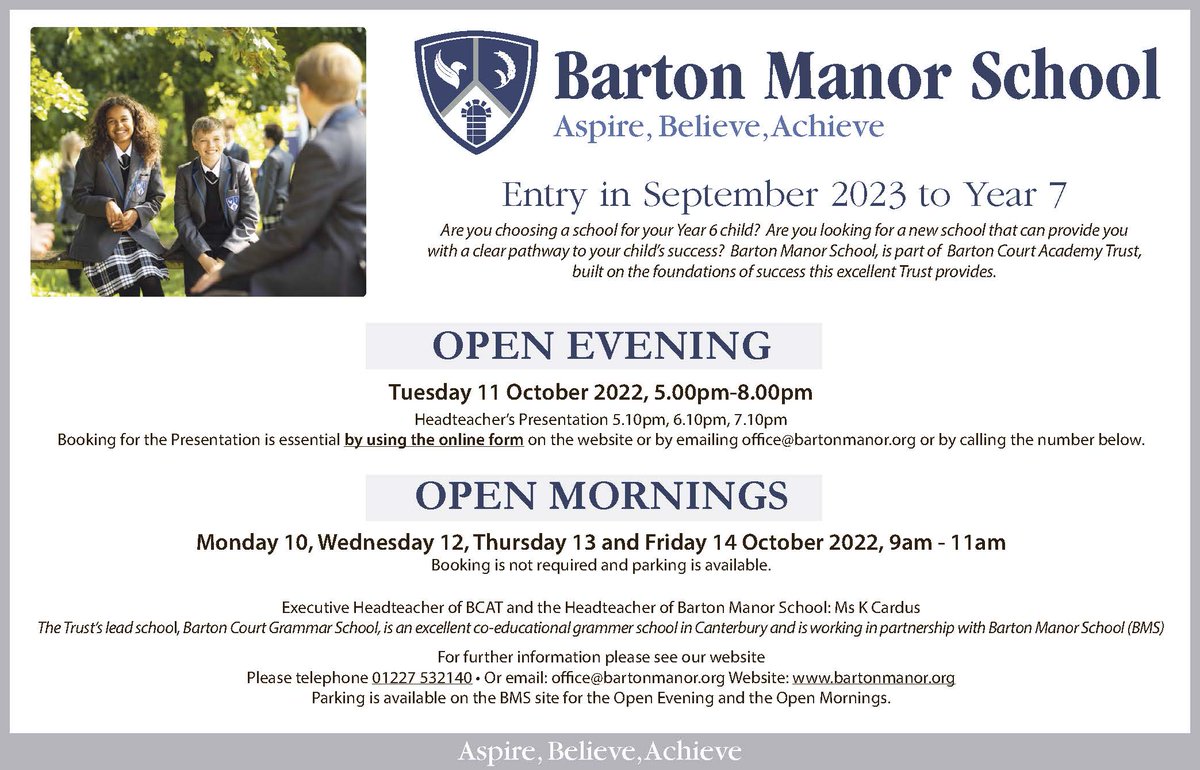 Details of our Open Evenings at both Barton Court Grammar and Barton Manor School are now available to view on our websites. Booking for the Headteacher Presentations is essential. https://t.co/vYXzZSnutx? https://t.co/nNxuwfXtnZ https://t.co/euifNJGWUH

Work in school and on site doesn't stop for the holidays! Our beautiful pond has been dredged in recent weeks - look at the difference! https://t.co/SuUIA1DRej

Congratulations to our Y13 students who achieved amazing results today, over 75% A*-B! 34 students out of 116 were awarded 3 or more A*/Distinction* grades in their subjects! All credit to them & staff who worked tirelessly during the pandemic to deliver lessons ensuring success. https://t.co/kKst8eENak 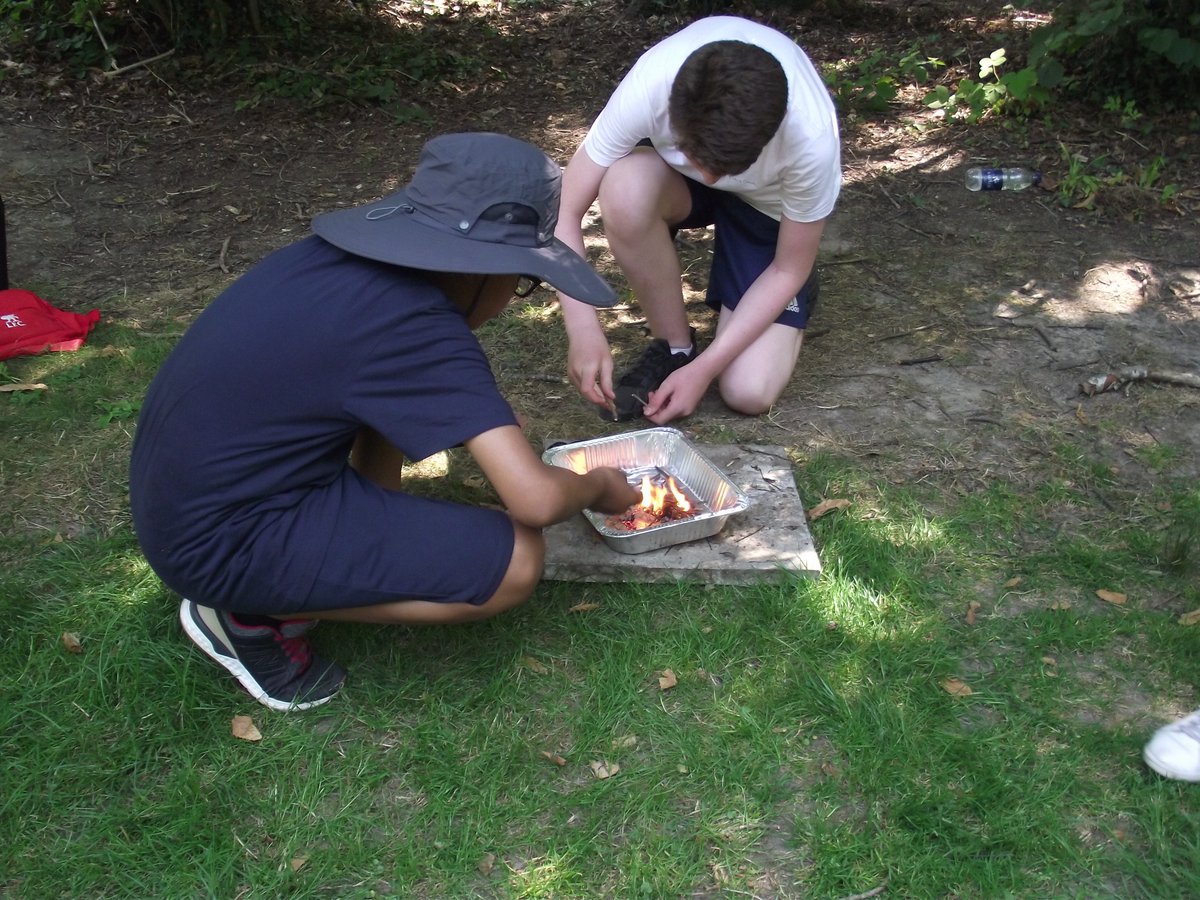 Our students just love Enrichment Week Camp and we were so happy to be able to, once again, offer this during the last week of term. It was so good to be back doing the things students love, such as camp fire building, archery, climbing and open fire cooking. Roll on next year! https://t.co/FzIX68aTZ8

We're committed to our staff wellbeing events as well as our very popular Chocolate Fridays when each colleague has a free drink & chocolate bar to celebrate the end of the working week. Our latest one saw staff participate in Clubbercise, cake decorating & a local historic walk https://t.co/TGpoSK1nW5

Barton Manor School hosted the first BCAT Trust Arts Festival earlier in July showcasing the talents of BCGS & CDS students & giving a sneak preview of a small part of BMS' brand new facilities. We hope our new students starting in Sept, many of whom attended, will be inspired. https://t.co/1paU712LHh 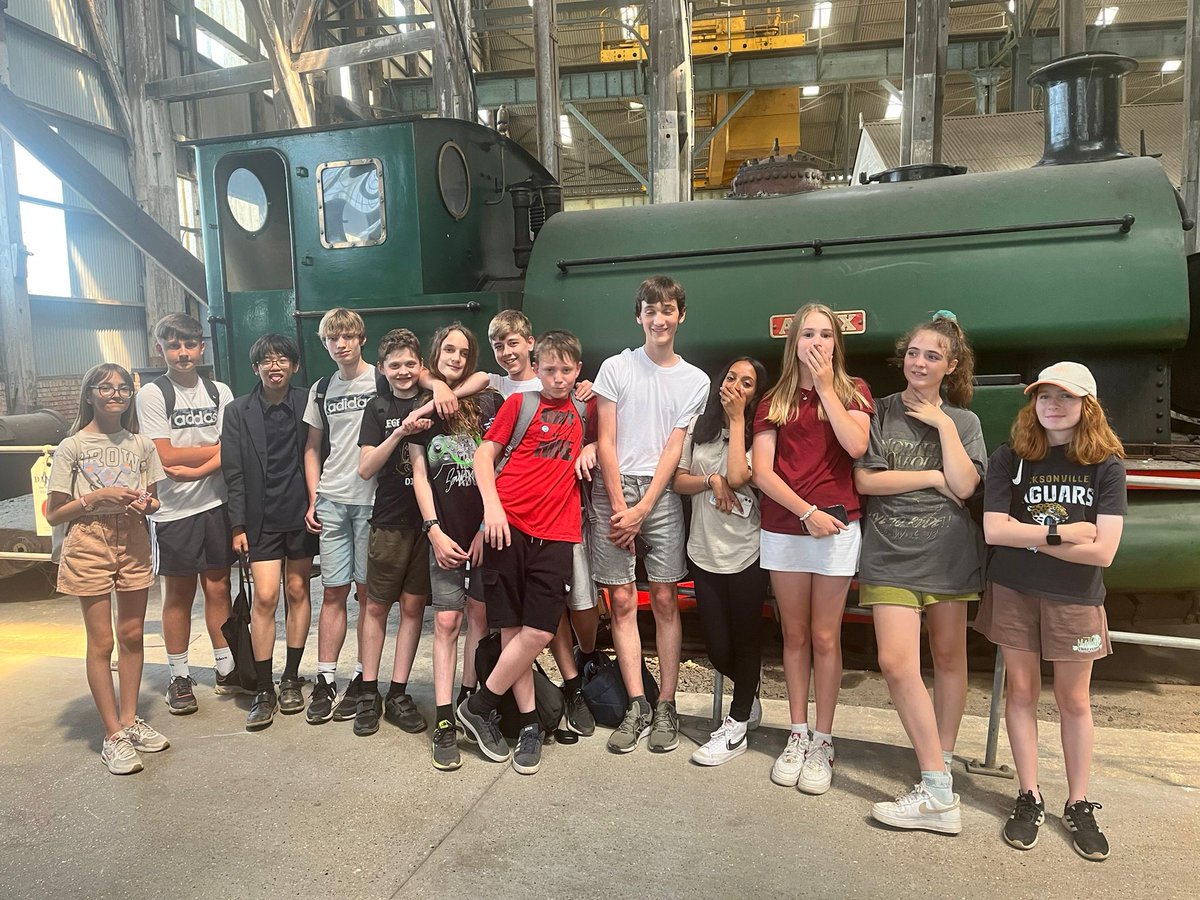 We're looking for talented and dedicated Teaching Assistants for our brand new school, Barton Manor, starting in September. If you or anyone you know is interested in learning more please click here: https://t.co/40UkxAa5bK

Announcing our new Sixth Form Prefect Team! We look forward to working with Tom, Beth, Paris and Sophie over the next year and the positive contributions they will make to the School. https://t.co/K9ljZ4c0Yz

Buying uniform over the next few weeks? Simmonds are running an Early Bird offer until 10 July 2022. https://t.co/qxveTwJ5dy

We're looking for a Learning Mentor/Cover Supervisor in our amazing school. Click here if you or anyone you know is interested. https://t.co/2gKaFX9w7o 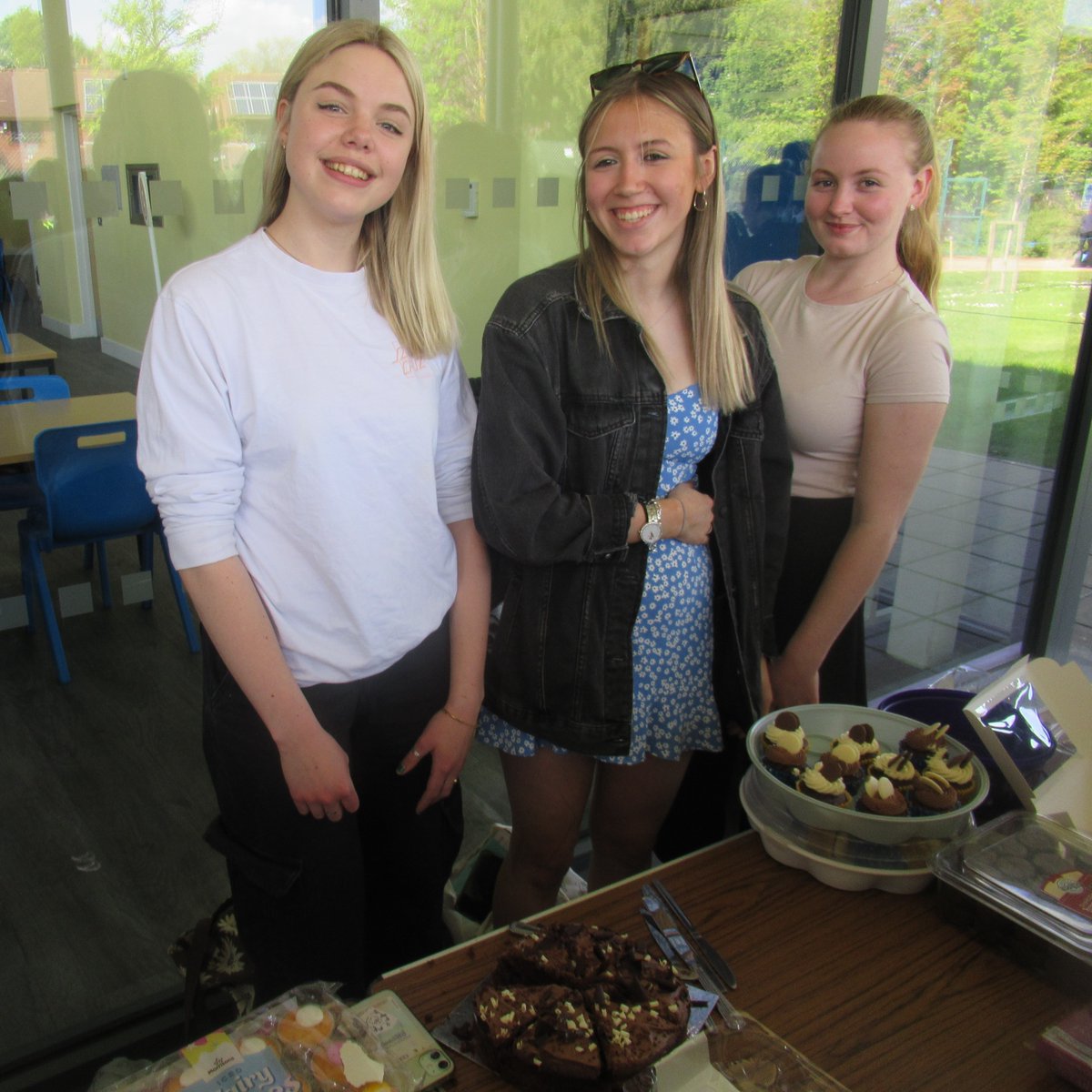 In not much over an hour we raised £237 for #ukraine last Friday in our cake sale. All money raised went to @BritishRedCross for their fundraising efforts. https://t.co/uP8bnFRs9A

We have been handed the keys to our brand new free school, Barton Manor. State-of-the-art facilities for the new Y7 arriving in September. Staff and governors were very excited to see it yesterday! https://t.co/LRO6uTekFd 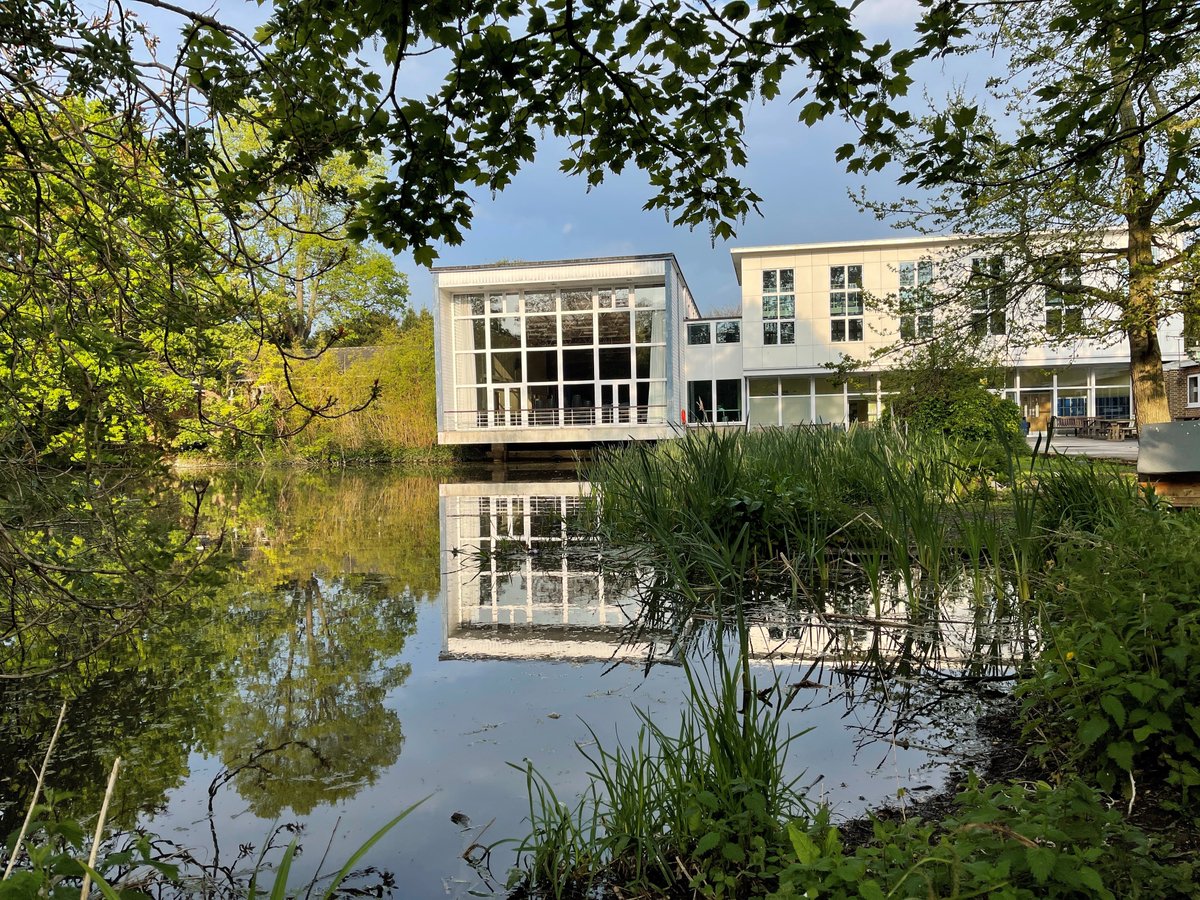 We're looking to recruit a Sixth Form Pastoral Manager to work with our Y12/Y13 students. If you or someone you know is interested please click the link below for more information. https://t.co/ozoyxUqqvm 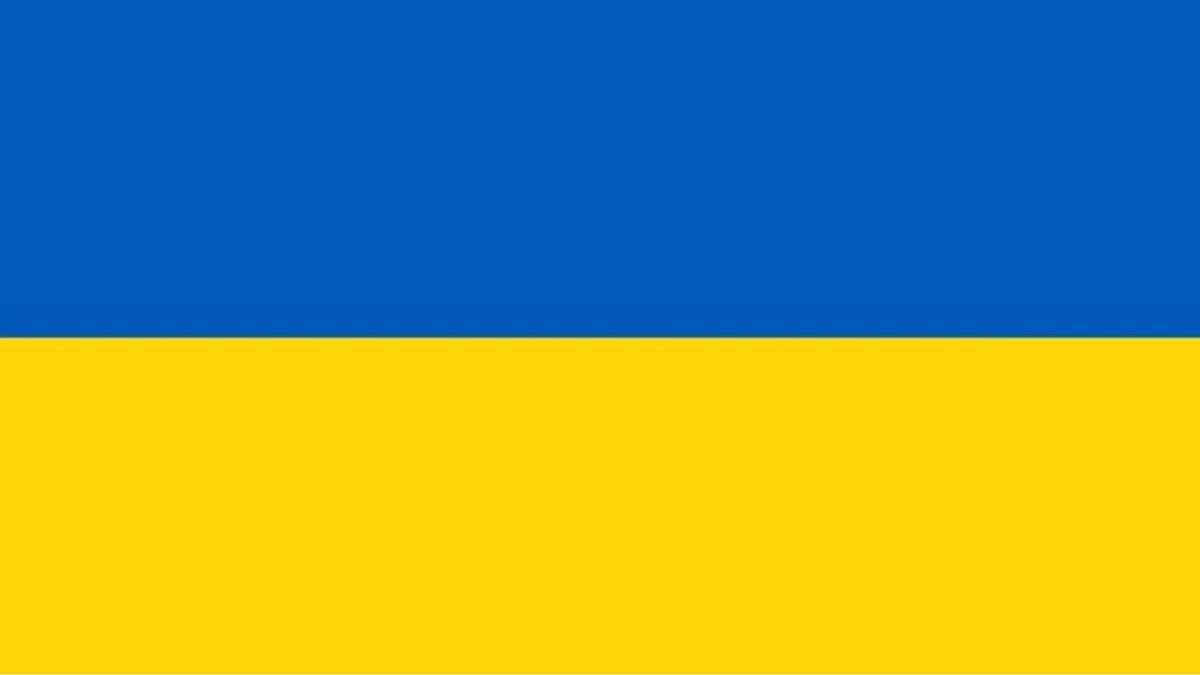 We raised £1,486 for Ukraine last week on our additional non school uniform day. This is going to the Red Cross to support their fundraising efforts. #Ukraine #fundraising #RedCross https://t.co/AmW6cBtLDv

If you, or someone you know, might be interested in joining the BCGS Local Governing Body, please click the link below. We currently have two roles available. https://t.co/ouSiqhBGJ4

BCGS welcomed over 20 employers to the Careers Fayre last week when students were given the opportunity to speak with businesses & universities from across Kent & London to find out about what is involved in a variety of careers. A big thank you to all who attended. #Careers https://t.co/YuJIK7mA4n

BCGS is part of the Royal Shakespeare Company’s Associate Schools Prog & this year students from Y9, 12 & 13 took part in a 2 hour workshop along with 21 other schools across Kent to bring the tale of Much Ado About Nothing to life. An amazing experience! @theRSC @marlowetheatre https://t.co/8PiOsOLxXd

We're looking for two new Governors to join our Local Governing Board for Barton Court Grammar School. If you are interested or know someone who might be please click on the link below for more details. https://t.co/ouSiqhBGJ4

Barton Manor school build was completed last week! The School will legally be transferred to BCAT on 1 May 2022 so we have plenty of time to move in ready to welcome our new Y7 students and their parents/carers to the transition along with welcome events planned for Term 6. https://t.co/p84CtqDzeC

We're holding an extra non uniform day on Friday this week to raise funds to support the people of #Ukraine https://t.co/67hBvfq3q4 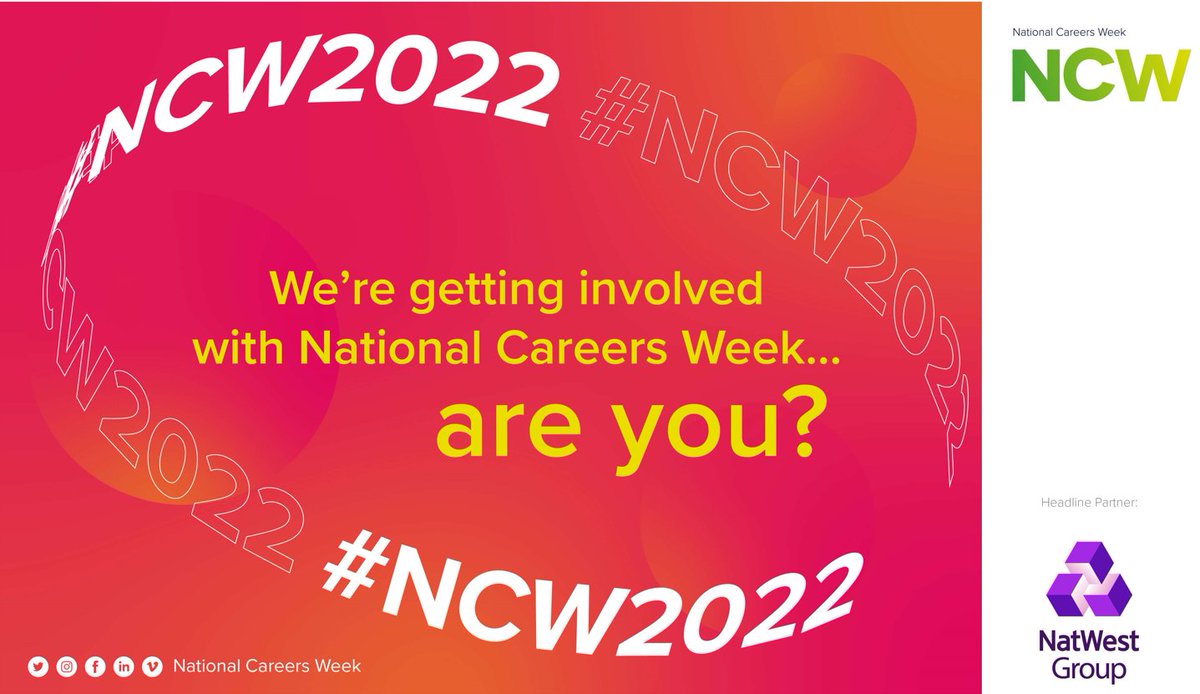 We're getting involved in #ncw2022 this week with information and support for students thinking about what they do next. We're also hosting a Careers Fayre for Yrs 7-13 on Wednesday 30 March which will feature a range of local businesses & post-16 & post-18 providers @careersweek https://t.co/kgacr0GsQx

We're proud of Niamh in Y13 who has set up https://t.co/HmSlzLTCkP as featured on Made in Kent Radio. A forum & blog for girls in Kent to share experiences & warn of suspicious sights in the area, it also provides female advice & info on various support groups @madeinkentradio https://t.co/Xvmqn2HDAS

A group of Y9 performed 3 devised pieces at The Arden Theatre in Faversham last week & after rehearsing in their own time they put together inspirational performances without help from staff, which were effective, emotional & informative. How proud are they of their plaque award https://t.co/xDJ9fc3TDt 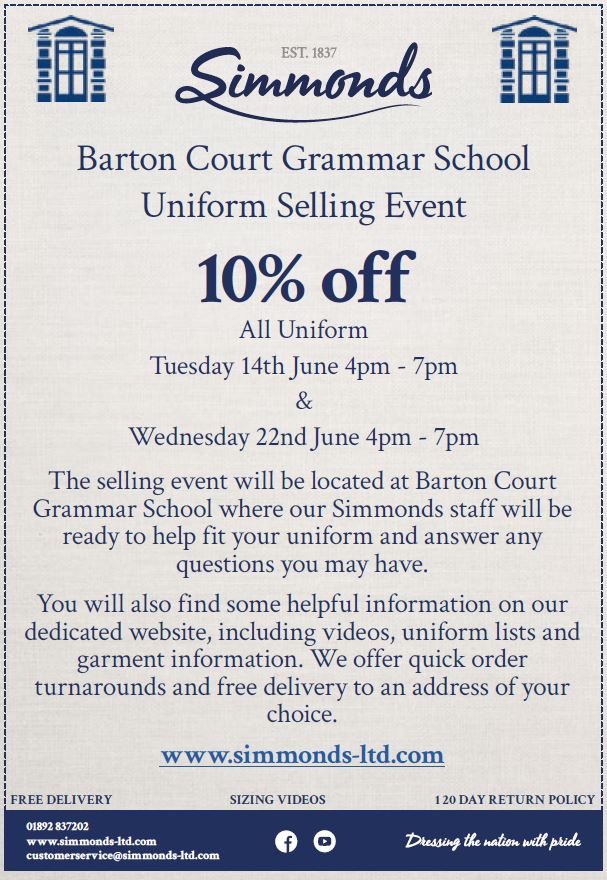 Advanced notification for your diaries. Special offer of 10% off school uniform at the Simmonds Selling Event in June this year https://t.co/QvUARHX2hr https://t.co/uzRupWBBVS

Our incredibly talented pianists Yamato & Rio were taught last week by the great Freddy Kempf in his masterclass at the Kent International Piano Course. Rio was crowned overall advanced course prize runner up. They performed Debussy & Liszt in the concerts. #piano #pianist https://t.co/my03BakREf 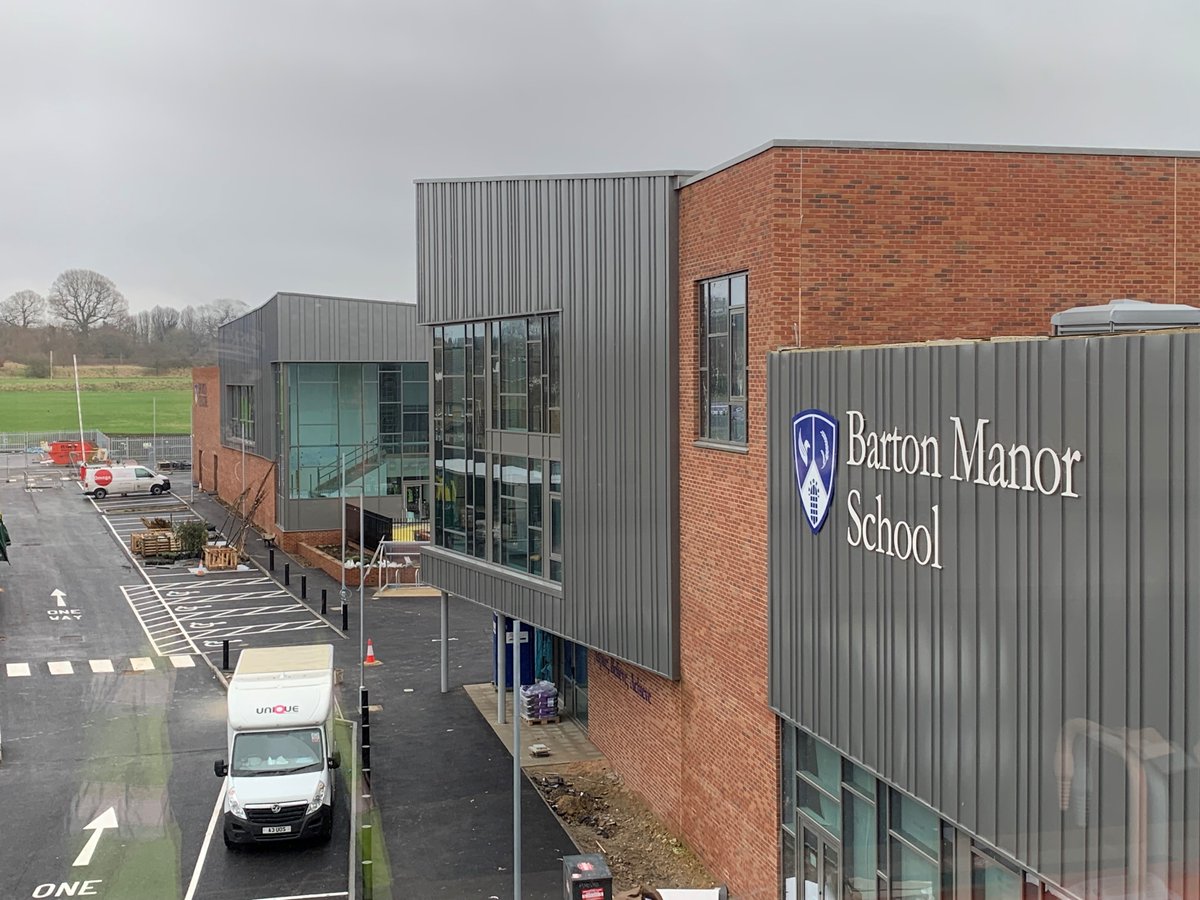 We are looking for an Assistant Site Manager to start at the School on 1 May. If you or someone you know is interested please click here for more details: https://t.co/99T87arMJH https://t.co/Aju3sX2ls8 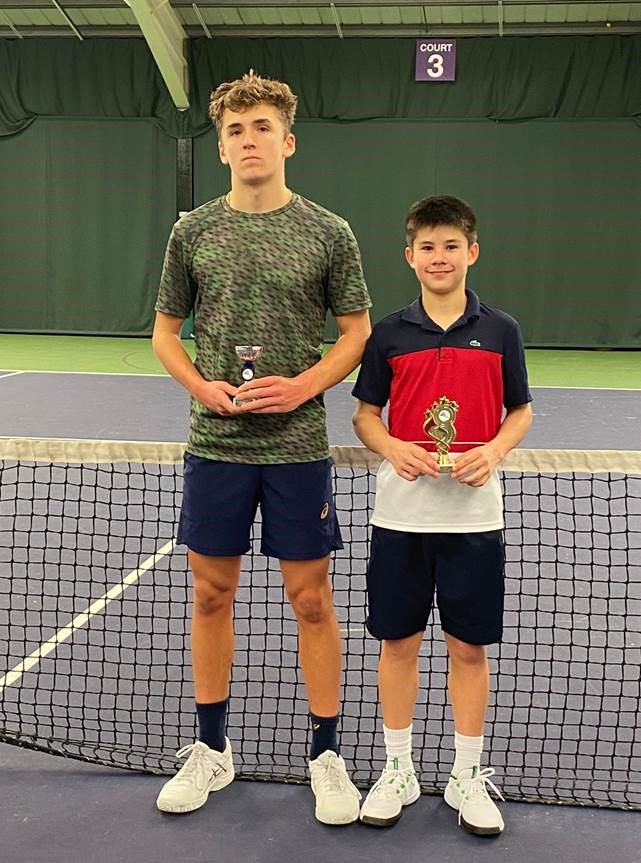 A great achievement for Ben who defeated the No1 seed (ranked 327) winning the J5 ITF Liverpool tournament. Ben ranked 560, now moves up to 458. The ITF Junior Circuit is the premier level for worldwide competition among under the 18's so Ben's success is just fantastic! #tennis https://t.co/ecZm2pnZMB

The House system at Barton Court was officially launched in 2011, with four houses: Wilberforce, Pankhurst, Einstein and Nightingale. A further house was added in 2016 in order to account for the expanding size of the school, moving from four form entry to five form entry. The fifth house is Turing.

Each house is led by a senior member of staff and two Sith Form House Prefects.

House colours are displayed on the house flash, which is worn above the badge on students’ blazers. Students also have a house T shirt, which they wear when competing in house sports events.

Houses compete with each other both in year and inter year in a range of competitions, which are expanding year on year. Barton Court Points, which are awarded for academic and extracurricular endeavours contribute to the house total, with the highest scoring house winning the House Cup each year. Sports Day is a huge house competition and the House Sports Shield is presented on this day. Students have house assemblies every term, where individual and collective success in the house is celebrated.